Can’t set our minds at ease, no matter what, because we cared too much about each other!  Translated…

My son has, absolutely NO faith, that his scatterbrained mother can take care of his young by herself, and I can’t feel secure, that he’s riding out late at night, making the deliveries, it’s, a looped around cycle of worrying, between parents and children.

The sudden onset of the outbreak of MERS-CoV, it’d, impacted the industries across the world, being on the front lines in the tourism industries, you can’t imagine it.  And, even though, we’re, going into, the post-outbreak times, the tourist industries tried to make it, by, proposing the trips within the country, but my daughter-in-law is responsible for the tour groups abroad, and, it’s going to take a while, until that start back up again.  In this very hard time, those who worked in her office took the pay cuts, some got laid off, everybody was on high alert, some quickly, transferred to alternative industries of work, to take the baseline minimum monthly wages to make ends meet.  And at this time, my young granddaughter came, and, other than the basic living needs, there’s, this extra expense, and so, my son had to, start making the deliveries after his regular work hours.

Canceling the nannies, and I’d become, the temp nanny, and I, naturally, supported my son’s methods of saving the money.  Actually, I’d, longed to have a grandchild a very long time, and, as I was gloating on it, my son handed me the Holy Bible of childcare that the nurses made from the hospital for the new parents, reiterated, “When you make the milk, first the water in the bottle, then the formula, make sure that the formula is melted completely, to the left and right, don’t shake the bottle up and down then, place it under the sink to get it cooled off, it can’t be too hot.” “Pour the unfinished amount out, don’t save it for the next feeding time.”  “Now the diapers have the signals of if it’s wet, when the signal turned from yellow to blue, time to change.” “Newborns shouldn’t sleep on their tummy, it would cause sudden infant death.”  “oh, and don’t feed her any water!”

I nodded, like a good student, listening to the words of the school teacher, thought: this first-time grandma, is an excellent master back when, it’s just, I hadn’t, be in the realms a long time, I’d just, lost, all of my childrearing methods. 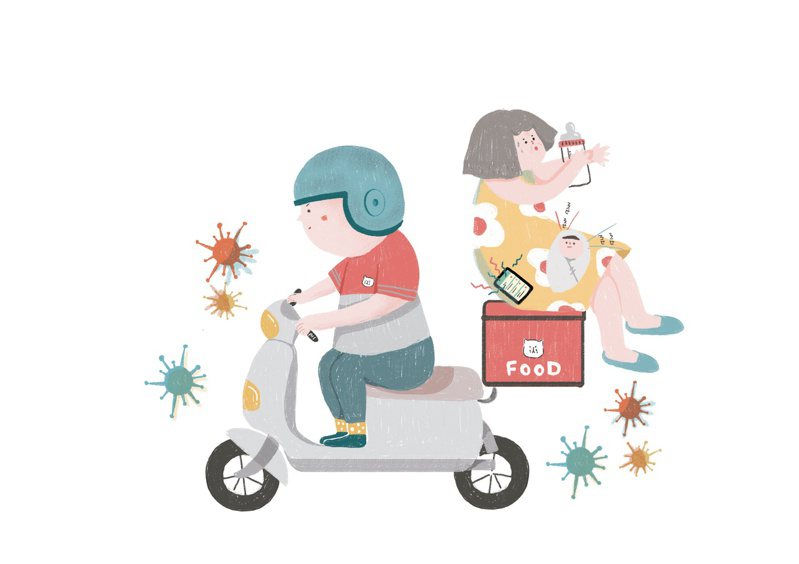 And, even though he’s away at work, he was, ill at ease, my LINE kept ringing nonstop.  “Mom, nothing’s going on, I just want to check in.”  “Did you put her down to a nap yet?”  “She cries a lot these few days, can you manage it?”, and, to stop him from flash-messaging, I’d sent him the photos of my young granddaughter, even though it was over forty years since I took care of a baby, but I still got it, I can, so totally, handle, a baby.

And, I’d, finally set my son’s mind to ease, but he’d, gotten me worried, I’d told him as he was getting out, “If you bump into a gambler, a drunk, or a drug dealer, if something feels like it’s, going south, RUN like the wind!” my son laughed at me, “it don’t matter who’s calling the deliveries, so long as they pay up.”  He’d not come home late in the night, and I’d not dared, sat in the living room and wait up, and, as I heard the key turn the lock outside, my unsettled heart calmed, and suddenly, by the following second, I was, able to, drift off into dreams.

Recalling how forty years back, I’d worked night and day, to help pay up the debts accumulated by my in-law’s family, my son were given to my ill mother-in-law and my chain-smoking father-in-law, I’d often snuck back home during work, to check out my eldest with two snots rolling down from his nostrils, getting held too tight, by my mother-in-law, whose bones had been malformed from arthritis; and my youngest son was often burned by accident by my father-in-law who had a cigarette in his mouth, dozed off to sleep, and yet, as I saw how sorry my in-laws looked, I couldn’t blame them.  And, no matter how awful, how insecure I’d felt, I still needed to believe, that these grandparents who may not be able to handle them, have the best intentions in mind, and will do their best, to care for my young sons.

Let go.  Set your heart at ease.  I’d, warned myself: the outbreaks shall pass soon, and everything will become normal, I just need to take care of my granddaughter well, so my son won’t have any worries, working, we both, need to, have that ease of mind here.