The trials someone faces toward the end of a loved one’s life, translated…

“We’d all wanted to hold our children’s hands, to watch them get older, but unfortunately, fate had other plans………” as Shu-Mei talked, she’d started, sobbing. She’d shared with the patients and the families, her own experiences, “Do we, or don’t we resuscitate?”, that is the final questions, that a lot of the terminally ill patients will face, it’s also, a heart wrenching memory for Shu-Mei, her husband had been gone sixteen years now, and yet, that intense heartache had, stayed.

Her husband was diagnosed with a rare condition when he was forty-six, he’d become bedridden for over a decade, and, couldn’t control anything, he’d already, become so discouraged, to the end, when he was on the respirators, he’d still had difficulties breathing, the doctor said, that only a tracheotomy can save his life, and, her husband wanted to die, and they’d, turned down the doctor’s offers, but, as their daughter came to see him with her five-month-old son, it’d, sparked his will to live again.

The doctor saw how he was hesitant, gave them three weeks to think about it, during which time, Shu-Mei lost a lot of weight, the whole family was living under this, dark cloud. If they’d decided to put him on a respirator, the patient will be living, off of the respirators; if they don’t, then, very shortly thereafter, he would die, he will, NEVER see her husband again. Shu-Mei was confused on what she should do, her husband asked her, “Do you want me to die?” She’d naturally not be willing to let him go, started crying, and became, silent, and respected whatever he’d, decided. It’s just, that during these years counting down toward death, he’d always worn his frowns, and, gotten stuck between life and death, don’t’ know if he’d, regretted it? 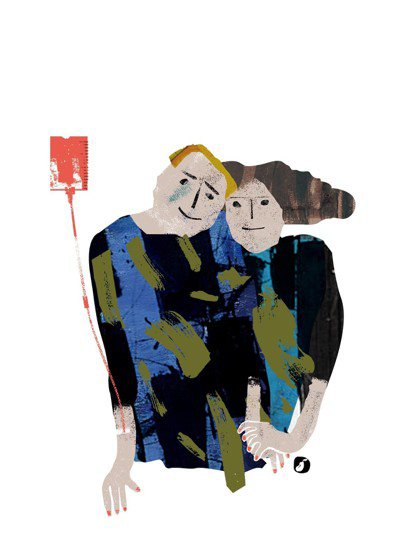 illustration from the papers…

“Back then, the medication had yet to pass the coverage of the health insurance plans, it was very expensive, there were the expandable items of phlegm tubes, the diapers, the feeding tubes, the caretaker’s fees………”, Shu-Mei told me, even as her whole family started saving up, it wouldn’t be possible for them, to pay for his care, she’d needed to work days and nights, and his daughter part-time through school, and they’d needed monetary assistance from their families, friends, relatives every now and then too. For the years, the medical bills, she’d, stuffed them all inside a drawer, and after her husband passed, she’d started, sorting through them, and, the amount exceeded five million dollars, she could bought a house with the money saved up. “Although taking him off life support only took a total of fifteen minutes, but there’s, such a high price for it, and, as life continued, and the patient had, suffered, it’d also, put the loved ones under great duress.” Shu-Mei told me, the pain, got in too deep, into her heart, that it’d, slowly, suffocated her.

A woman in the support group, whose husband was ill, started, sobbing after she’d heard, she said that they’re currently, facing this difficult choice, especially that they didn’t have enough money saved up, and she worried that she’s not as strong as Shu-Mei had been. Another woman looked worried, that her husband just had an intubation, at the age of thirty-something, he’d, fallen very ill, her mother-in-law loved this youngest son the most, and couldn’t stand seeing him die, and even if her son can no longer call her mom, even if he’s kept alive by those machines, she was willing, to keep him alive. It’s just, that the wife found, that her husband, when his own mother wasn’t looking, he’d tried, to disconnect himself from life support, seeing how twisted and in pain her husband’s face became, she said, that there isn’t a day she hadn’t cried.

Shu-Mei patted her gently on the shoulders, and cried with her, “We all want to grow old with our children, having each other with, but, fate wouldn’t allow it”. If it’s already set, then, just live with it, everything shall pass eventually. Shu-Mei consoled with the woman in her support group.

This, is a hard issue to deal, to let go, or to keep hanging on, but, when the patient is suffering so much, it’s only the right thing to do, to unplug her/him off life support, but, a part of you just, wasn’t willing, to let someone you love die, and so, you have to, struggle hard over the matter, and, eventually, you will, realize, that letting the person you loved dearly die is the best choice, because, keeping the person alive, means prolonging their sufferings, and, nobody wants to see their loved ones suffer toward the end.

Filed under Choices, Do-Not-Resuscitate, Life, Properties of Life, Right to Die, the Finality of Life

Tagged as DNR, the Terminally Ill

The Air, My Friend

The column by Jimi Liao, translated…

I Heard His Cries

I Felt His Despair

Then, Immediately, Came to Me Again

And so, this showed, how the pen IS, mightier than the SWORD, the words touched people, even AFTER they’re done, getting spoken out there, and the influences of words will keep on carrying over…

Tagged as Having Someone Who Undesrstands You, Longing for Companionship

The Time that’s, Stopped, on Those Walls…

The time that’s, stopped, on those walls, do you not see it, how the clock turned DEAD at a quarter ‘til???

The time that’s, stopped, on those walls, what does it signify? That time hadn’t moved on, but, we surely, had, ‘cuz, we are, no longer who we were, a minute ago, and, nothing’s, ever gonna be, the same again!

The time that’s, stopped, on those walls, they can’t, restart again, can they? It wouldn’t be, as simple as, changing the batteries on that clock, because, even IF the machine starts to work again, nothing will ever be, the same as it had been, or was, once!

He’d Shown an Immense Talent in Playing the Traditional Chinese Instrument in Prison, Learned, that His Own Father is a Professional Musician Too

Helping these inmates, find a motivation to get better at something, so they won’t return to their old ways after being released, from the Newspapers, translated…

Yesterday, the Cultural Department of Hualien went into the Hualien Penitentiary to host a certification program of the street performers for the inmates, “Yang” an inmate received good comments for his piano skills. He’d started getting into music after he’d started serving time, and fell in love with piano, and after he’d started taking the lessons, he’d, learned that his own father had earned the championship trophy for piano skills, and, as his father named him, he’d used what made him glorious, the piano, as a character in his name, and he’d hoped, that after his release, he can use the piano, to start off on a new page in his own life.

“Yang” is thirty-five years old, at age 25, he’d made the wrong moves, had planned out a kidnapping ransom, was sentenced to twenty-four years; five years ago, he was, transferred to the penitentiary in Hualien, and went into the Chinese instrument playing program, and because the Yangqin wasn’t played by anybody, he’d started picking it up, and, loved the sound.

Later he’d learned from his family, that his own father who’d passed, was a professional yangqin player too, and had earned the championship trophy in Guangzhou.

“As I’d played, I’d often thought about my father.”, Yang, who’d gotten his name from the instrument told, that as his father named him, he’d already, passed this glory to him, “I can’t let my father down”.

Yang still has two more years until he’s up for parole, he hoped to pass the certification for the street performers, and, after his release, hoped to play as a single or in a group, and go to the nursing homes to perform for the residents, to give back to the community.

Another thirty-six-year-old, “Lei”, got involved in drugs when he was younger, and, he was convicted for robbery, sentenced to fifteen years, and, learned to sketch in prison, he’d picked up the art skills, and had already, kicked his drug habits now, he will be up for parole this year. He said, that taking up art had helped his parents accept him more, and, his work hung all over his home. He’d signed up for the certifications program, hoping that after his release, he gets to go home to open up an arts workshop.

So, these are, two examples of men, who’d, worked hard, to overcome their pasts, and, they’d, found viable skills, and they now have goals that they’d hoped to achieve, and, hopefully, this will keep on driving them, after their release from prison.

Reality had, started, using DREAMS, as its, PUNCHING B-A-G!!!

And, before we all knew it, these dreams, they’d become, so bruised to, beyond RECOGNITION already…These bruised dreams, what are we supposed to do with them now? They’re, NO longer perfect (compared to in the beginning, when we’d, dreamt them all up, before reality started, KICKING their ASSES???), and, we don’t want, ANY sort of imperfections, appearing, in our dreams, do we? So yeah, we’d, tossed them out, along with the TRASH, on Monday mornings, for the collectors to, pick ‘em all up, and, recycle them.

These bruised dreams, maybe, we should, keep them ‘round, who knows, the bruises on them, may eventually, be gone, and they’d all be, good as new again, won’t they? And, tossing them all away, wouldn’t it be risky? After all, it’d taken us, long enough, to finally, start seeing these dreams, slowly, coming true in our lives, and, we shouldn’t just, toss them all away, because of those, itty, bitty, bruises that’s now, startin’, to show, should we???

These bruised dreams, even AS they’d, made their, complete recoveries, they will, NEVER be the same again, because, these dreams will, NEVER get, returned, BACK to the time, before they got, those, blue, green, purplish, bruises, coverin’ up, ALL their, “bodies”……… what reality is doing to dreams, EVERY second of, every day of our lives…illustration from online…

Tagged as Dreams that Got Punched by Reality