When You’re Far Away, My Thoughts Seem Astray

It’s like, you’re, in control of my thoughts, ‘cuz when you’re far away, my thoughts seem astray, they are lost, with no way, to get back home, to me again…

When you’re far away, my thoughts seem astray, they’d, flown toward where you are, and, no matter how loudly I’d screamed at them to come back, they won’t, not until, you’d, come home to me…………

When you’re far away, my thoughts seemed astray, and you’re now, very far from where I am, and, so, I’d, let go of my thoughts, figured, that they will, eventually come back to me, after they’d had enough of you, just like you’d always, come back to me again!

Filed under Codependence, Dependency, Despair, Enmeshment, Life, Loss, STUCK in a Cookie Jar, The Fate of a Woman, Wake Up Calls

An Elementary School Girl Used Her Scholarship Prize Money to Help Support Her Household, Two Elderly Men: Let Me Help Her Too

Kindness from all around, from the Newspapers, translated…

“Do let me help her!”, the special report from the papers this March about how the elementary school age girl, Wei-Han Wang lived with the low-income assistance money from the government that supported her family of four, consisting of her grandparents, and an older brother, how although life was hard, she’d not gotten beaten by it. As the newspaper printed her story, “Grandpa Yeh” came to the school himself, and told the officials he’d wanted to sponsor Wei-Han Wang by the month, and “Grandpa Chen” sent a letter, with cash enclosed, it’d warmed up Wei-Han Wang and her grandmother’s heart.

The news report pointed out, that Wei-Han Wang was only in the fourth grade, and yet, she’d accumulated a whole STACK of awards, from when she was in the first grade, she’d received $2,000N.T. for scholarship for excellent academic performances, which she’d turned into her grandmother, to help the household, and she’d earned scholarship money from a foundation too.

A week after her story was told after March 10th, an eighty-year-old elderly C.E.O., Yeh went to the elementary school to visit, after he’d met the principal, Chen, he’d shown her a newspaper clipping from his wallet, told her, “I want to help her out!”

Grandpa Yeh said, he grew up poor, that he’d started his business from nothing too, that now he has the abilities, and he was very moved by the young girl, Wang’s story, wanted to give her a better life, and so, he’d made the trip to Bitou, and expressed how he’d wanted to help Wei-Han Wang out each and every month.

The principal, Chen was moved, told him, that Wei-Han’s grandmother believed that there are those less fortunate than she, and turned Grandpa Yeh’s offer down, but Grandpa Yeh helped install the wind-resistant windows, he’d also bought the cleaning equipment for the outside walls of the school to help the school, so the kids won’t have to sit through the cold winters in class. 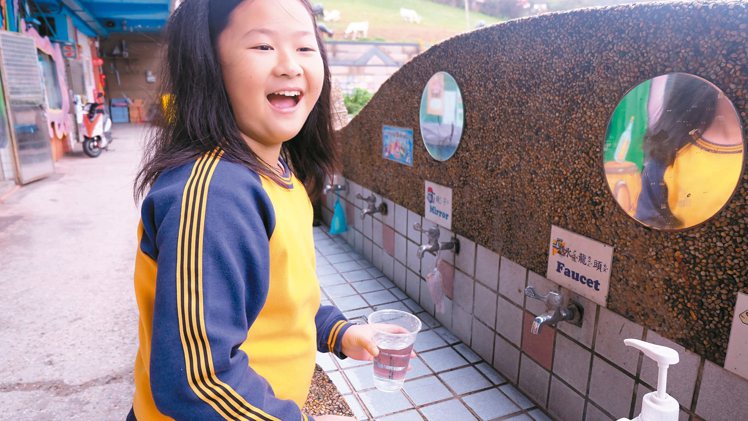 a photo of the young girl in school, courtesy of the UDNpapers.

Several months later, on August 23, the elementary school received a registered mail signed by “Grandpa Chen”, with the newspaper clipping, and $6,000N.T. cash; Grandpa Chen who teaches as a professor at Poli-Sci University said, that he thumbed across the story about Wei-Han in the newspaper, he was very moved by the hardworking mannerism of the young girl, he’d clipped the news off, and placed it in the first page of his notebook, and would read it once every single day.

Awhile ago, he’d passed by the local office of the Department of Education, he’d asked the secretary there for the address of Wei-Han Wang’s school, wanted to send her something, also, to fulfill the wish he’d carried, for so long already.

As the Wangs received Grandpa Chen’s money for help, they were very moved, and, Wei-Han told the press happily, that after she’s older, she too, will help others in need as well. 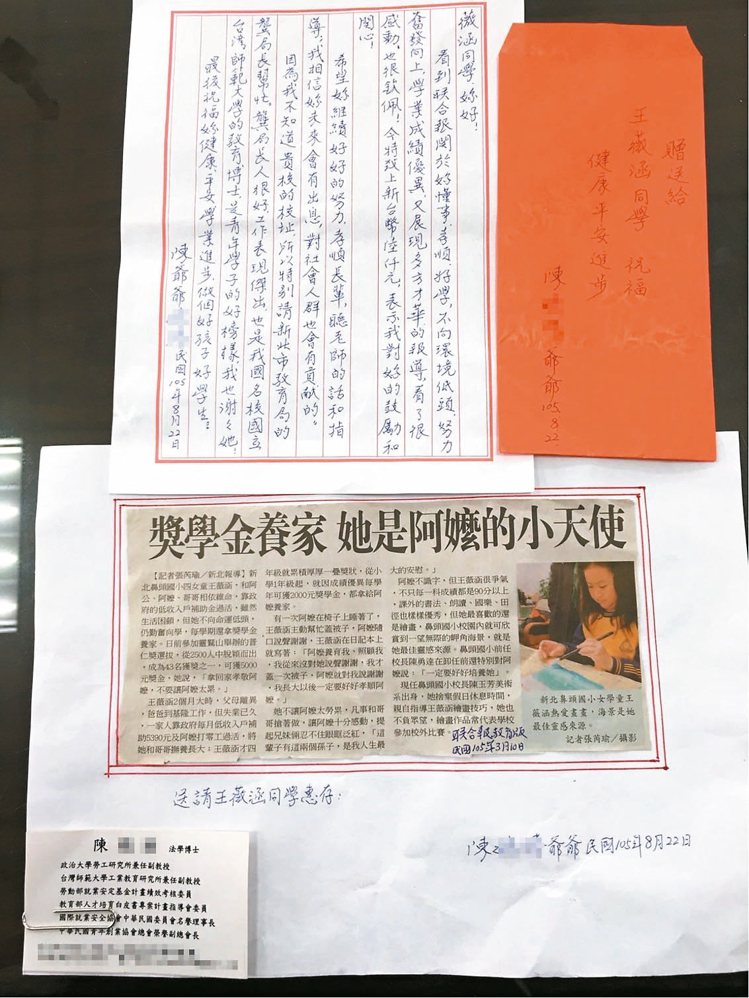 the letter written to the young girl by the elderly man who’d donated to help her and her family out, from UDN.com…

Tagged as the Cycle of Kindness