An Ordinary Story, with Extraordinary Love

A story, that warms up the human hearts, what we’re, in need of more, especially, today, from the Front Page Sections, translated…

I saw a heartwarming report on the papers: this February, there was, a pitbull that seemed to have been abused by humans started wandering around the mountains, and got noticed by the hikers, and was named, “Flower” by the flowers.  His story got passed among the hikers, and everybody hoped that he could be, lifted off the mountains, and receive the care and attention he’d, needed.  The mountain worker, Yong-Hong Chang (Hong) started looking after him when he’d gone up the mountains, helping the dog to reestablish the trust, and, had tried to bring him down many times.  But maybe, it’s the bad experiences Flower had from human interactions from before, she’d, always, run off scared, as she got close to the entrance of the hiking trails.  At the start of July, the hikers all worked hand-in-hand, and, Hong and his friend, started up, this rescue mission.  And after sixty whole hours, they finally got Flower, to follow them to the entrance of the hiking trails.  And this time, Hong ignored the pains from his fractured wrist, and, carried Flower, who was close to twenty kilograms onto the car—and, without a leash, or any sedation—he finally, led Flower, out of that patch of mountainous woods she was, once lost in, took her down the mountains, to get her the treatments and care she needed to get.

In all of the millions of news headlines that flashed across our eyes daily, this tiny little article, it’d, caught the writer’s heart.  As I read this story, that surge of warmth flowed through me. 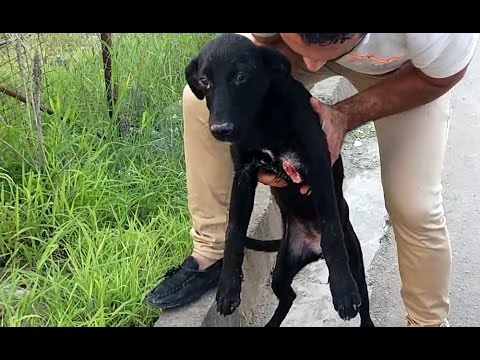 the kindness toward animals, photo from online

I used to have a dog, Happy, who was with me for twelve whole years, he was a black lab, grinning ear to ear always.  The interactions of man and dog, transpire between words, and, I’d had the depth of experiences, and understood, how it felt for the animals who were, abused by humans in their lives, how hard it would be, to regain that lost trust in human again.  And because of this, as the paper described how the man, Hong lost track of Flower, he’d started calling aloud, “Flower, Flower”, then, a black shadow came dashing out of the forest, run toward him, and all I can say, is such a heartwarming scene that was.

There’s, this, extraordinary surge of energy in the midst of the mountains.  Not just between the man, Hong, who’d, rescued Flower; from how the hikers shared the stories on social media, to how they mapped out the rescue routes, how they contacted the wildlife reserves locally, to taking the dog to the vet, to placing her……it’s, everybody who’d, chipped in, making this deed possible!  The thought of “hoping he’ll be happy and healthy” became the primary force, which made this heartwarming, deed, with some levels of difficulty, possible.

I’d heard a story: on the beach after a certain typhoon came and went, a young girl started, picking up the starfish, and throwing them back into the oceans.  An elderly man who’d, been through the ups and downs of life asked her, “Child, what would be the purpose of doing this?  Toward this beach full of starfish, you’re, only, able to make a difference to the limited few?”, the child opened up her eyes wide, “Thank you sir, I don’t have the answer to that, I just know, that for the starfishes I’d tossed back into the oceans, their lives are, saved.”, the words of this young girl, showed the power of a greater sort of love.  The story of Hong and Flower, it’d, made me see the extraordinary love, from a story, quite ordinary.

a video of how a dog waits, at the same spot, to be, rescued by humans, off of YouTube

In 2020, MERS-CoV had, taken over the world, and, it’s even worse, for those who are, living hard, plus the natural disasters, the bad policies from the lawmakers, how people are currently being, taken advantage of daily.  In this upsetting moment, allow the story of “Hong and Flower”, to warm all our hearts.  And you and I can think on, how do we within our own means, show those around us the love, and care we have to show.

And so, this, is exactly, the kind of stories that there’s more of a need for right now, because, there’s, a ton of bad things going on in the world right now, the world’s, going up in flames, murders, natural disasters, made worse by manmade errors, etc., etc., etc., and we are, in desperate need for these sorts of tiny little stories, that warms our hearts.

Tagged as Kindness Toward Animals, Rescuing a Stray

4 responses to “An Ordinary Story, with Extraordinary Love”