Their Home Got Broken Down by the Winds, Over Hundreds of Volunteers Came to Help with the Rebuilding of Their Homes

Goodwill, of the members of, the community here, off of the Front Page Sections, translated…

The rundown shack that the resident, Lee in Suao, Yilan couldn’t shelter him, his girlfriend had died, in the cold fronts last year, she was all that he had.  The New Taiwan Volunteer Group, in order, to not let the same things happen again, on the 21st, the volunteers had, built a house for him, so he could have a warm roof over his head.  There were, over hundreds of men and women who showed as volunteers, they’d all rolled up their sleeves, from all around Taiwan, pulled the money to get to the area, and, donated the materials, put up the money needed, for a house to get built out of their own pockets, this home that’s, made and filled with the love was built up, using two weekends, and it’s being, remodeled, and, by next Sunday, Lee could, move into it.

The sixty-four year-old man, Lee “Cheng” lived in poverty stricken means, the walls were falling down in his resistance, the roof leaked, it couldn’t, block out the wind or the rain, or the cold fronts that came.  “Cheng” had a girlfriend whom he’d, lived with, she was originally weakened by illness, and, as the cold fronts hit last November, their rundown shack couldn’t block out the cold weather, his girlfriend’s weakened body and couldn’t withstand the cold, she’d, passed away.

the “home” where Lee was living in 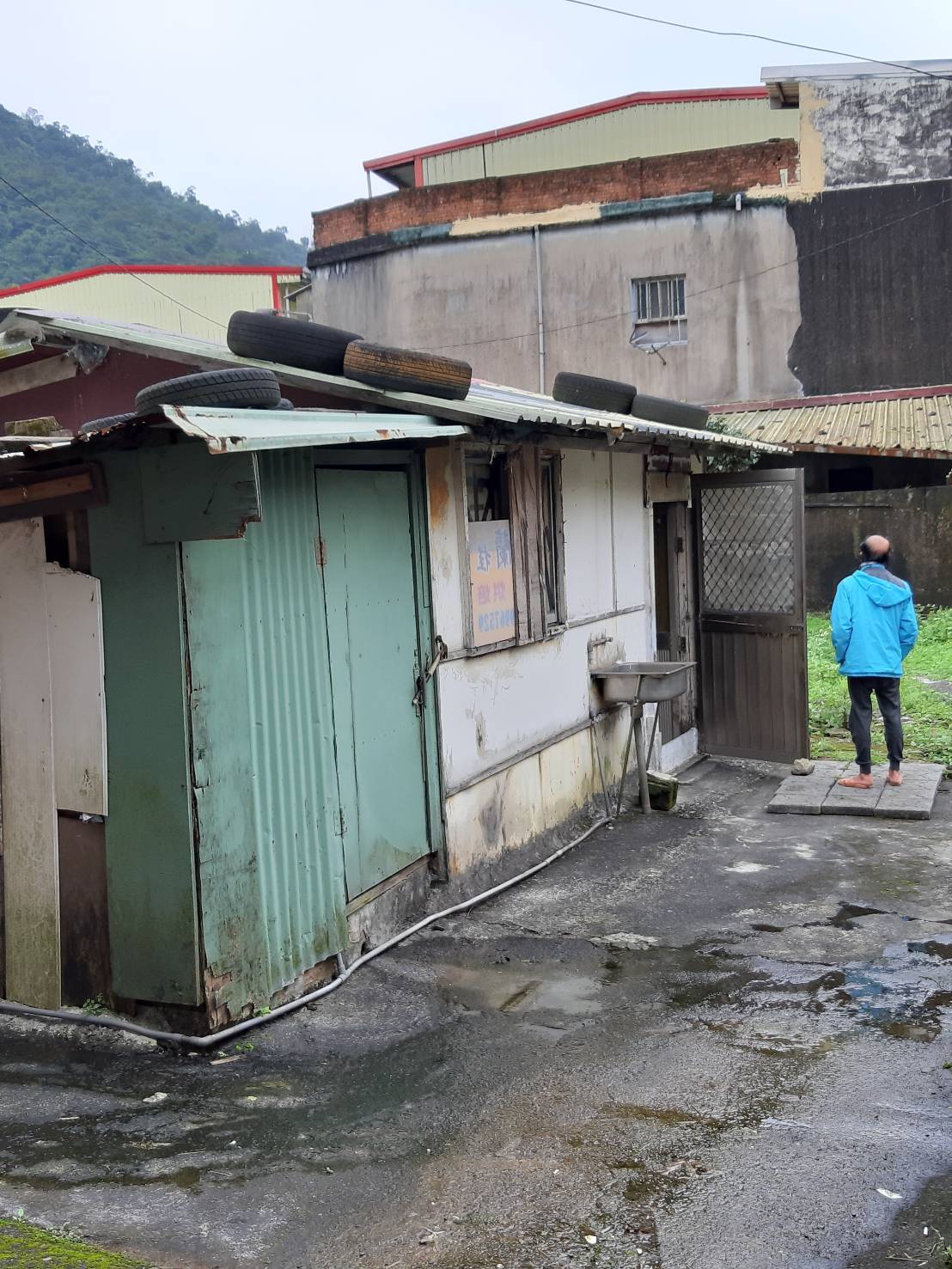 photo courtesy of the New Taiwan Volunteer Group from online

Before “Cheng’s” girlfriend had passed, the volunteer group noticed this case, and immediately wanted to offer assistance, only, that they’d lacked the funding then, and the foundation was, overseeing other worse off families, and couldn’t offer the assistance on time, but they’re, already, raising the funds for the house for “Cheng” back then.  And yet, they were, too late, the rundown shack that “Cheng” resided in broken down, and it was, demolished, he’d, camped out in the cargo container houses close by.

The volunteer group, in order to NOT allow for the tragedies to happen again, in the leadership of the C.E.O., Yo, they’d, raised about $550,000N.T.s, bought the construction materials, shipped it to Suao.  And, all the builders were, volunteers, the volunteers gathered at three in the morn in Taoyaun on the 21st, got on the car, arrived in Suao, and started the building process.  The volunteers first set up the steel structures of the frames of the home, and connected the electricity, made sure that there’s water running, before this Saturday, they’re, going to start the remodeling of the inside of the house, the setting up of the furniture, the appliances, by Sunday next week, they’re, to hand over the keys to the house to “Cheng”, so he could, move in.

“The volunteers helped build up the house, and, they’d, put up the traffic costs, the foods, as well as their own, insurances too!”, Yo told, the volunteers, in helping to build up the house, they’d not received a cent in money, they’d even, had to, pay for their stay, as well as their meals.  The charges for food is $100N.T. a day, the room and board, $200N.T.s a day, the insurances cost $50N.T. per day, the cost of transportation, $100N.T., for this two day one night volunteer work, the volunteers needed to pull $550 N.T. out from their own pockets per person.

The volunteers were assigned to various duties based off of their expertise, some saw the steel pipes, welding, connected the wires, digging up the drainage pipes, as the material shipped couldn’t get to the construction sites, all the volunteers, started lining up, like ants, carried the heavy steel, wooden boards, the iron shack roofs, even the already, welded frames.  Everybody rolled up her/his sleeves, put that work helmet on, and started, working; some of the female volunteers who worked in the office, who’d, never lifted anything heavy, they’d helped, carrying the steels, the roof boards, the eleven-year-old boy, also did his part, helping to make the building project happen.

And so, this, would be, the collective efforts, the kindness from all around the island, because this man needed a roof over his head, and he couldn’t, buy a property on his own, because he couldn’t make the money, so, this group of volunteer came, to help make him a home from scratch, and in the process of building, everybody took up a role, to make this wonderful house, built with love happen, to give this man, a safe place to stay, a roof, over his head.

Tagged as Giving a Homeless Man a Home, Goodwill of the World, Help from All Around the Community