A Two-Year-Old Child Was Abused to a Vegetative State, His Parents Were Charged

Parents who hurt their young, off the Front Page Sections, translated…

At the start of last year, there was a two-year-old boy who fell into a coma, his parents carried him into the E.R. to ask for help, but the child had subdural hematoma, he became, a vegetable, the doctors who treated him found that he was covered in bruises and wounds old and new, that there were, puncture wounds on the soles of his feet; the police and social workers intervened, and found, that the boy’s twin older sister, and another younger sister of a little over a year old were, “disciplined” the wrong way long-term, the Changwha District Court yesterday charged the abusive parents.

This pair of husband and wife admitted to what they did to their own young children, admitted that they’d, improperly, disciplined the children.  In the indictments, the D.A. stated, that the boy’s father was guilty of abuse, and the mother had long-term abused the children, and charged with physical assault, and negligence assault, and suggested to the judge, to increase their sentences by fifty percent of what would normally be given to the adults charged in similar conditions. 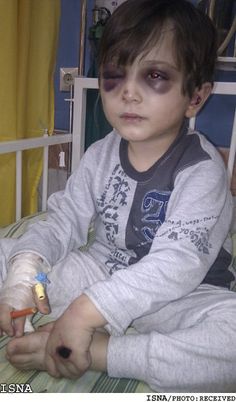 At around noon of February 8th, this couple rushed their two-year-old comatose son into the E.R.  The doctors examined him, found the child to suffer from subdural hematoma, and they couldn’t get him back, he fell into a vegetative state, and because the doctors, in their examinations of the boy found there were wounds old and new on him, that there were puncture wounds on the soles of his feet, they suspected it was a serious case of child abuse, and immediately notified the police and the social services.

The child’s mother admitted, that on February 8th of last year, she was alone at home with the children, he’d started crying, she couldn’t soothe him, she’d picked him up and started, shaking him, and accidentally, bumped the young boy’s head on the wooden wardrobe, then the child had, stopped crying, and that was when she’d realized that her son was in a comatose, and started twitching unstop, she’d, panicked, and found something sharp, to stab the child’s soles, to attempt to wake him up using pain.  Later, as her husband returned home from buying them lunch, they’d quickly, rushed their young child to the E.R.

And, we still have here, TWO unfit parents, and, this time, a two-year-old young boy was beaten to comatose, and this couple managed to have a total of FOUR young children between them, and you can guess, how many times this kid’s younger and older siblings may have been abused, but, you’d, probably, NOT come close to the exact number of times these young children were hurt!  And these parents deserve to DIE for what they did to their own young children.

Tagged as Child Abused to Death by His Parents, Death of a Young Child

2 responses to “A Two-Year-Old Child Was Abused to a Vegetative State, His Parents Were Charged”